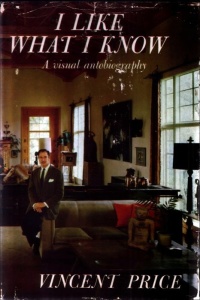 In 1959, Vincent Price recounted his life-long passion for the art world in I Like What I Know. Here are some extracts from Price’s visual autobiography, in which the 48-year-old actor looks back at his visit to Belgium and Germany in July 1928…

ON BELGIUM
‘We drove to Belgium in a bus. We saw the trenches and the rows of crosses in Flanders fields, so peaceful now. But I could sense the anguish in the people, still – and two of our Tour 22 requested that we visit at the graveyard of their son – at least, they thought it was the graveyard – I was brought up short by the individuality of war. I had been too young to remember much of World War I, except the flags, food restrictions, saving tin foil, and the gaiety of the armistice. But these two people, standing at the gateway to the graves with heads bowed, their secret silent in themselves, I wouldn’t forget. In Brussels we were burdened with only one work of art: a famous statue of a little boy. Everyone knows the feeling, but why make a monument to it?’

ON COLOGNE
‘Three weeks of intense sightseeing had passed, and the next two countries were considered sport: Germany and Switzerland. While this book is to be mostly a visual experience, I must honestly say that we ate more than we saw in these two countries.’

‘Cologne was impressive, and its cathedral made me realize how minutely we Americans had achieved Gothic opulence in our assimilation of that great architectural tradition. We’ve never been able to make such forests of stone, and the nave in Cologne seems as if it could contain the Woolworth Building. Those opening vaults, reaching the roof and branching away to a solid interlacing of foliage, expand the mind to think of their conception. The fact that this cathedral was in the process of being built for a thousand years (and was only completed in the last century) tempts us to accept its vastness almost as though it had a mind of its own and knew the world would increase in population, if not in faith, and could put its enormity to good use. It stands there, symbolic of the unaccepted open-armedness of faith.’

ON NUREMBERG
‘We didn’t go to Berlin. Very few Americans did then, because the Berliners apparently were having a rather vulgar recovery from the ravages of war. But we did go to Nuremberg, thank God. If I had never seen this city, or could only see it later – pastures of rubble – I would have missed the realization of the German Renaissance and the fact that it’s from that Renaissance that we inherit so many moments of our modern life. Dürer, above all… and Luther, Cranach, our love of etchings, the invention of the printed book… a hundred things. The city itself is pure romance – the walls, towers, lovely churches, houses that have changed nothing but the inhabitants – and Dürer’s house where, as far as I’m concerned, he lives still.

ON DURER AND THE PRAYING HANDS
For me, Dürer is one of the few supreme artists, not only because of his incomparable skill, but because of his aliveness. As Rembrandt was alive to men, Dürer was alive to nature. He is an exciting painter, though not the greatest. He is the master engraver, not the most profound. But when he looks at nature, when he draws from nature, no man extracts the essence more.

You can fall in love with Dürer and his art more readily and more completely than with most, but if the sheer beauty of ‘The Praying Hands’ seems enough to most people, it is when you know what they are praying for that you really understand his genius. These hands are in supplication, that you may see him through to the complete communion he achieved with nature and natural life. See how he parts the grasses to explore the roots, and parts the roots to probe the sod, then discovers in the sod the roots of life itself.